Vietnam International Bank (VIB) has announced business results for the first nine months of 2022 with outstanding business performance, strong balance sheet, well-maintained risk management and liquidity ratios and the highest rating in the banking industry decided by the State Bank of Việt Nam.
During the nine-month period, VIB reported total revenue of over VNĐ13.3 trillion, up 29 per cent year-on-year. The bank's non-interest income reached more than VNĐ2.4 trillion, contributing 17 per cent to total operating income while its operating expenses saw a yearly rise of 12 per cent at VNĐ4.6 trillion, much lower than the revenue increase.
As a result, the bank's cost to income ratio (CIR) decreased to 35 per cent, showing its cost management efficiency at the top of the industry. Its provision expense was estimated at more than VNĐ900 billion.
According to VIB, its pre-tax profit topped VNĐ2.78 billion in the third quarter. The figure hit VNĐ7.8 trillion from January to September, surging 4 per cent over the same period last year.
At the same time, VIB’s return on equity ratio (ROE) stood at 30 per cent, confirming its presence in the banking industry’s leading group.

In the first nine months of 2022, VIB's pre-tax profit reached VNĐ7.8 trillion, up 46% year-on-year. The bank’s return on equity ratio (ROE) stood at 30 per cent, confirming its presence in the banking industry’s leading group. — Photo courtesy of the bank
Strong balance sheet, concentrated risk among the lowest in the market
As of September 30, 2022, VIB's total assets reached VNĐ341 trillion, up 10 per cent year-on-year. Its outstanding credit balance topped VNĐ228 trillion, up 12 per cent compared to the end of 2021.
Currently, VIB is one of the banks with the lowest concentration risks in the market thanks to its efforts to maximise concentration risk dispersion, the high retail loan proportion which makes up 90 per cent of the total outstanding credit balance with 93 per cent of loans having collateral.
In addition, the outstanding balance of corporate bonds of VIB stood at about VNĐ 2.1 trillion, equivalent to 0.9 per cent of total credit balance – a very low figure in the banking industry. Of which, most issued bonds are in manufacturing, trade and consumption areas. 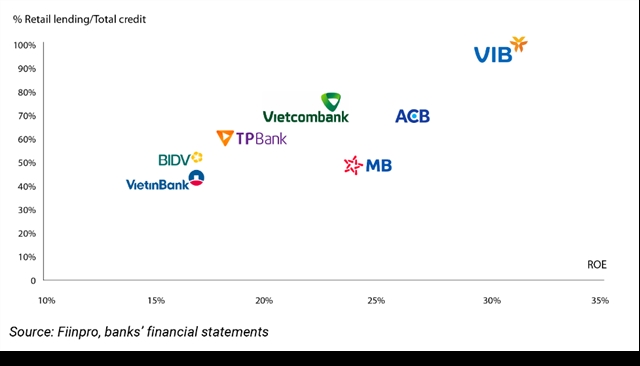 Source: Fiinpro and financial reports in 2021 of several banks. — Photo courtesy of the bank
Equity increased sharply, foreign strategic partners in the safest group in the world
According to the bank's financial report, VIB's total equity reached VNĐ30.5 trillion as of September 30, an increase of 26 per cent compared to the end of 2021, more than double the growth rate of outstanding loans.

Commonwealth Bank of Australia (CBA) is now VIB's largest shareholder, holding a 20% stake in the bank. CBA is regarded as one of the largest banks globally by market capitalisation at $105 billion. It is considered one of the safest banks in the world with baseline credit assessment at a2 by Moody's. — Photo courtesy of the bank
As per the report, VIB's return on equity (ROE) has been maintained at an average of 30 per cent for many consecutive years, providing an additional source of capital for the bank's operations. The capital adequacy ratio (CAR) under Basel II reached a high level of over 12.4 per cent, compared with the SBV's regulations of over 8 per cent.
Along with accelerating the growth of customer base and deposits, VIB has maintained high liquidity ratios. In which, the loan-to-deposit ratio and minimum liquidity holdings ratio were 75 per cent and 17 per cent, respectively, while the ratio of short-term capital for medium and long-term loans stood at 32 per cent.
Top ranking rated by SBV, strong risk management
Recently, VIB was one of the few commercial banks to have the highest ranking of the SBV. It was honoured by the State bank thanks to high scores on capital adequacy, asset quality, governance, business results and liquidity.
As a pioneer in the application of international standards, VIB is the first bank in Việt Nam to complete the 3 pillars of Basel II in 2020. It is also the first in applying and complying with Basel III standards on liquidity risk management in 2021 and is also one of the few banks to issue audited financial statements for 2020 and 2021 in accordance with international standards (IFRS).
Leader in many retail segments
Over the past five years, VIB has been one of the leading banks in terms of retail credit growth. The bank's retail loan balance exceeded VNĐ200 trillion, making it among the top private joint stock commercial banks.
By the end of Q3/2022, VIB was among the top banks in terms of market share for auto loans and life insurance nationwide. Besides, it was also recognised by Mastercard as one of the banks with the fastest credit card growth and highest card spending in Việt Nam. VIB led in the growth rate of Mastercard credit cards, making up nearly 35 per cent of Mastercard's total spending in the country.
Most typically, VIB is a pioneer in promoting applications of artificial intelligence, big data and machine learning in card operations. In July, Vie - the first AI financial expert in Việt Nam was launched by the bank with the ability to advise and guide clients to open and use cards on all digital channels. Later in August, VIB received nine awards from Mastercard for its outstanding credit card activities not only in Việt Nam but also in the Asia-Pacific region.
With a consistent customer-centric strategy in digitisation and digital transformation, VIB has pioneered in applying many new technologies and developing value chains to bring customers better experiences.
From January to September, VIB experienced outstanding growth with the number of digital banking transactions increasing 100 per cent year-on-year while witnessing 93 per cent of transactions being made via digital channels.
The bank’s MyVIB Digital Banking App has thus far received awards from The Asset magazine for the fifth time, and for the eighth time it has been granted other prestigious ones by major international media agencies such as The Banker, Global Finance Review.
Lately, the Vietnam Records Association (VietKings) handed two records to VIB including "The first bank in Việt Nam to provide Augmented Reality technology on mobile banking application MyVIB 2.0" and "MyVIB 2.0 - The first Cloud Native Mobile Banking application in Việt Nam."
As a bank with the highest retail loan proportion in the market, VIB continues its business strategies on speeding up digital transformation for all banking products and services, maintaining the leading position in a number of key retail business segments, while focusing on risk management to ensure safety, healthy and transparent coefficients.— VNS
Read original article here
File đính kèm: